I just watched a BBC program called “The artist formally known as Captain Beefheart” and there was this great quote from Matt Groening, creator of the Simpsons and a man with excellent musical tastes!!

For some of us out there this beat bam bam bam bam bam bam (beating fist on hand in 4/4 beat) the factory rhythm, the rhythm that we all march to is very very tedious and one of the great things about Captain Beefheart’s music is that it breaks this rhythm (repeats 4/4 rhythm)…. it’s badebabba badebaba – you know it does all that other stuff and it gets away from that.

A Squid Eating Dough in a Polyethylene Bag Is Fast and Bulbous, Got Me?

The death of Captain Beefheart was announced yesterday, he died in a hospital in Northern California from complications associated with Multiple Sclerosis from which he had suffered since the early 1990’s and which had confined him to a wheelchair. In reality Captain Beefheart had died many years before when Don Van Vliet gave up music in order to concentrate on his painting. 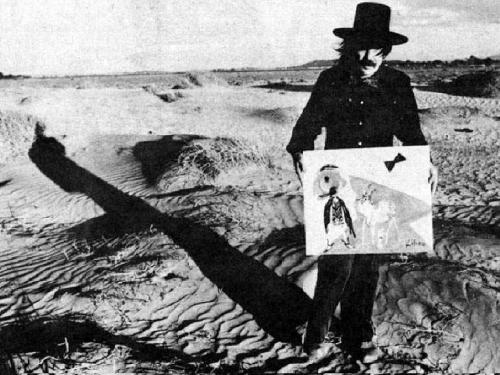 Don Van Vliet was a true visionary artist in both his musical career and his painting but not an easy one to get to terms with. When my wife asked who Captain Beefheart was. I explained that if she took everything she hated about my music, stuck them all together, gave them a good shake and then played it backwards she be on her way to understanding. Captain Beefheart was definitely an acquired taste but to those who loved his music he was one worth acquiring!

I went to see him on what turned out to be his last ever UK tour in October of 1980 at the Apollo in Manchester. A friend of a friend asked me if I wanted to go and I said yes. In the same way as when I saw Frank Zappa (a musical collaborator and lifelong friend of Van Vliets) for the only time; I saw him before I was ready, before my musical education had expanded enough to really appreciate him. I am however so glad that I did see him. My memory of the night is of him shuffling on and scowling at the audience but maybe that’s just the image I have in my head after so long.

While I was at University I remember borrowing Trout Mask Replica from the Rock Society in the Student Union. I, like so many others, found it to be almost impenetrable but I persevered over the years and it slowly became a favourite as did the wonderful music of Captain Beefheart. Ironically I had loaded a couple of his albums onto my mp3 player last weekend and had listened to Safe as Milk a few days before he died. Curiously three or four of my friends had also felt the urge to listen to that very album this week too.

Beefheart had a wonderfully deep voice which was as much a growl as a singing voice, he also played harmonica and Sax. He was known as a hard task master reputidly locking the Magic Band into a rented house for eight months while they “lived” the Trout Mask Replica album. The band struggled to get to grips with the experimantal music that transcended rock, jazz, blues and a multitude of other styles. One of the Magic Band members, John “Drumbo” French, once described the process of recording with Beefheart as

If Van Vliet built a house like he wrote music, the methodology would go something like this… The house is sketched on the back of a Denny’s placemat in such an odd fashion that when he presents it to the contractor without plans or research, the contractor says “This structure is going to be hard to build, it’s going to be tough to make it safe and stable because it is so unique in design.” Van Vliet then yells at the contractor and intimidates him into doing the job anyway. The contractor builds the home, figuring out all the intricacies involved in structural integrity himself because whenever he approaches Van Vliet, he finds that he seems completely unable to comprehend technical problems and just yells, “Quit asking me about this stuff and build the damned house.”… When the house is finished no one gets paid, and Van Vliet has a housewarming party, invites none of the builders and tells the guests he built the whole thing himself.

The Magic band reformed during the middle of the last decade and toured a few times with Drumbo taking the Captains role. I caught them performing at Glastonbury in 2004 and while they were enjoyable it wasn’t the same. It was always hoped by fans that Van Vliet would come out of retirement and tour again but he was never really comfortable with performing, once freezing on stage before turning around and walking off the back of a 10′ high stage and landing on the band’s manager.

So Van Vliet spent his last years as an almost recluse and concentrated on his painting. It’s said that a friend told him that no one would take him seriously as a painter while he was Captain Beefheart and he would always be considered as a musician who painted.  It was this that made him give up performing to concentrate on his painting. His art, like his music, was abstract and experimental but he was considered to be an talented painter and his work sold for high prices.

The dust blows forward ‘n dust blows back
And the wind blows black thru the sky
And the smokestack blows up in suns eye
What am I gonna die?

Here is a video of Captain Beefheart performing on the beach at Cannes in the south of France in 1968. It’s a great video of him performing at the height of his career made even better by some superb camera work. 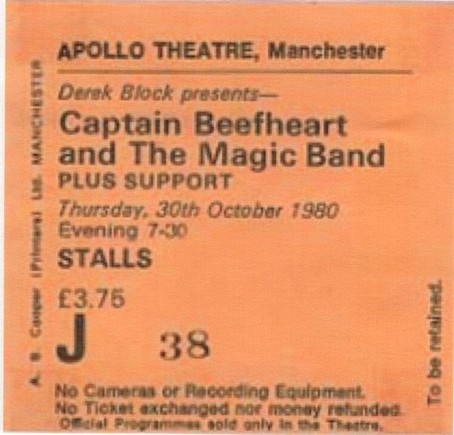 In 1977 this song was barely off my turntable – I’d bought the Live EP that came out that summer which had this song and Medicine Man on it. It’s one of those songs that as soon as I hear it I’m transported back to those days. I remember staying at my Gran’s house that summer while my mum and Dad were away and it was one of the songs that I played on my little record player.

I saw the band a couple of times around then at the City Hall in Newcastle, I forget how many times but it was either 2 or 3 times. We met them after one of the gigs and they were a really nice bunch of blokes. I also recall that on one of the tours they had vowed not to play their famous song Mockingbird but the crowd at Newcastle kept on shouting for more even after the house lights came back on until eventually the band came back on and played it urging us “Not to tell anyone!”

So it was with sadness that I learned today of the death of one of the band members Woolly Wolstenholme who committed suicide on Monday. The band released a statement on their website stating that: In recent weeks Woolly’s mental health had taken a turn for the worse and sadly he took his own life on Monday 13th December 2010

The harder you try, the lower you fall
The way that it seems, so they say
The mountain is high, the valley so low
You’re losing your dreams on the way

So you’re gonna be a rock ‘n’ roll star
Gonna make it on your own
Write a song that everyone can sing along
So you want to take a trip to the stars
Can you find your way back home?
You’ll get your break, but don’t you wait too long

Looking behind you
All the bad times that you’ve had
Looking before you
Only good times?

I know it’s the middle of winter and summer seems so far away but those of us at Sol have been working to put together the line up for next year which will be our 5th year.

Here’s the line up and running order for 5ol 2011 (which, to the best of our current knowledge and, in some cases, subject to confirmation, should be about right):

The prices for next year’s SoL will be as follows:

If you want to buy tickets for two separate days, these days have to be consecutive – ie Friday & Saturday or Saturday and Sunday.

For further info or tickets check the website or e-mail solparty777 AT hotmail.co.uk (REMOVE AT and replace with @)