I went to see the Grateful Dead’s Phil Lesh last year at the Brooklyn Bowl in Greenwich, part of the O2 complex which was formally the Millennium Dome. I’d bought the ticket ages ago, when we went on holiday in April but at the time I wasn’t sure about the gig which was why I only bought a ticket for the second night. Now don’t get me wrong as bassist for the Dead I love Phil’s work – he’s probably one of the best rock bassists around. However since the passing of Jerry Garcia in 1995 Phil has been playing with his friends and I’ve not had as much interest in his stuff as I’ve had in Bob Weir’s Ratdog. The main reason for this was, and still is, Phil’s singing! It can be bloody painful at times!

Still he was a member of the Grateful Dead and we moan about how infrequently they’ve played over here so I felt I had to go.

Then of course there was the second problem! When I bought the ticket our house wasn’t even on the market! Since then it’s all changed and we are moving next week so I wasn’t sure if I’d even be able to go. Until Sarah asked if I minded if she went out for a meal with her former work colleagues one night this week and quick as a flash I said As long as I can go out on Tuesday. Which was silly as the gig was tonight (Wednesday!) Still I got here and that’s the main thing!

I knew some friends were meeting up in a local pub so once I’d parked my car and got changed in the car park I headed off to find them. I had planned to put a tie-dye Dead shirt on but in the end decided to stick with my Grateful Dead Hour t-shirt. This turned out to be a mistake as one of my friends was wearing exactly the same t-shirt! Still never mind. The pub was a nightmare to find anyone in as it was rambling both inside and out. I did eventually find them and sat and had a pint with them. They decided to set off to the venue as they were taping and wanted to get in early to nab the best spot. As other friends had turned up by then I stayed on and chatted till we set off to go to the venue.

We walked through the park as the sun was starting to sink in the sky and eventually reached the front door of the O2. The actual venue was right round the far side so we had to walk for ages to get there. We were a little disconcerted to see security with sniffer dogs on the concourse but can only assume they were looking for explosives! We did eventually get into the venue which is a bowling alley with a stage at the other end of the room. I saw lots of people I knew in there but as usual I sloped off to watch the band on my own. This is what I prefer to do – during the support band the same person told me four times how much he liked them!

Phil’s band tonight weren’t the Friends he usually plays with. In stead they were the house band from Phil’s club in San Rafael, California – Terrapin Crossroads and included his son Grahame on guitar. The rest of the line up was 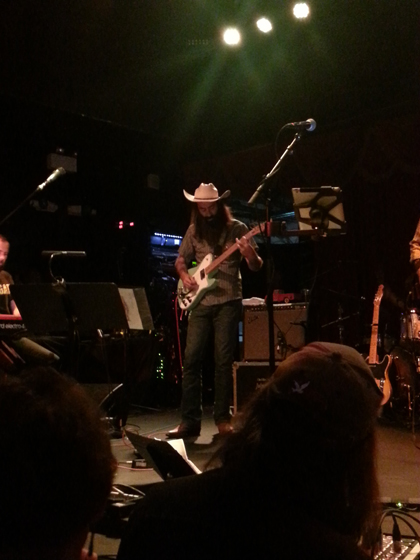 The gig got off to a great start with the opening jam turning quickly into Uncle John’s Band. Even Phil’s singing didn’t seem too bad! This was followed by West LA Fadeaway sung in part by part time vocalist Emily Sunderland (great name!). The next song was a Wings cover! Let me roll it, followed by a song from guitarist Ross James. Briefly back to the Dead for a favourite of mine Ramble on Rose before going off again for the Band’s the shape I’m in and then a Grahame Lesh song. I was starting to get a bit restless, after all you don’t go to see a member of the Grateful Dead to hear them play cover versions all night! (Well unless they were the one’s the Dead were famous for!) The next song was, would you believe it, a Fleetwood Mac cover – Gold Dust Woman. This would have compounded my feelings if it hadn’t been such a good version with Emily Sunderland belting out the vocals.

The gig really took off at this point and as she left the stage at the end of the song the familiar riff of Viola Lee Blues rang out. Then a strange thing happened, after the first verse they changed tack and launched into Friend of the Devil. I was thinking it was strange that they’d only done one verse of Viola but the answer came when at the end of FotD they sang the second verse. There was then a very obvious jam that I knew exactly where it was going and sure enough the opening bass riff of the Other One rang out. Phil standing there playing it only a few feet away from me. That moment made the night for me. During the second verse a strange thing happened. Phil sand the first two lines but was the interrupted by a guitar solo from his son! He returned to finish the verse once the solo was over!

The band then finished up Viola before Emily Sunderland came back on to finish off the set with Sugaree. The band went off and didn’t return for what seemed like an age. This was unfortunate as a lot of people had to leave to catch the last tube to get home. When the band did come back on Phil was carrying a bucket of red roses and he went to the microphone to announce that his son had chosen the trip to Europe to ask his girlfriend to marry him. Champagne was opened on the stage and they all toasted the happy couple.

The encore itself was stella. The first song(s) I ever saw the Dead play was the wonderful Help on the Way>Slipknot>Franklin’s Tower so it seemed fitting that this show should end this way, albeit with a Ross James song called El Paso dropped in there somewhere!

Afterwards I wandered back out of the venue and headed back to get my car from the car park. It had been a good night – better, I’m told, than the previous night. It was the last gig I’d go to while living in the South and I had finally got to go to the Dome even though it had taken me over 14 years to do it! I hope Phil comes back soon and hopefully he’ll bring Furthur with him next time – but we always say that don’t we! 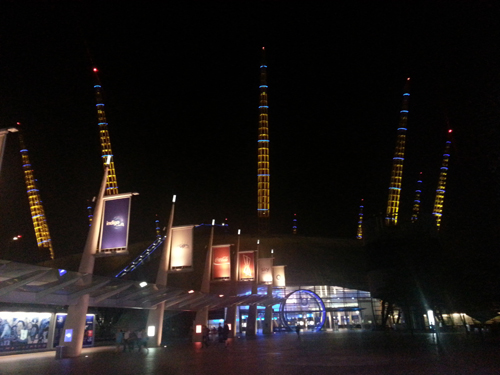 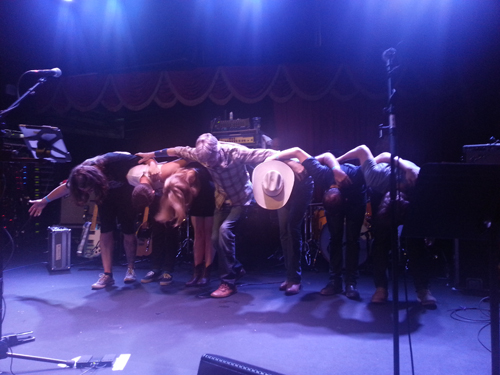 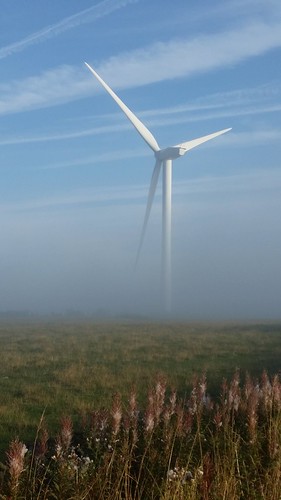 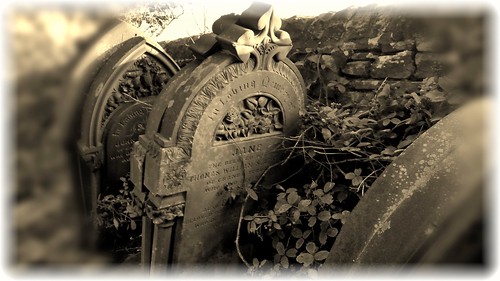